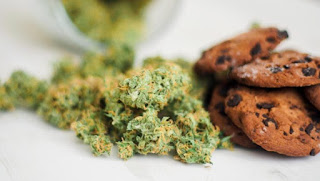 Munchies: Does cannabis really increase desire for junk food?
Published Sun 3 Mar 2019
By Tim Newman
Fact checked by Isabel Godfrey
A recent study shows that one of the stereotypical behaviors that people associate with consuming marijuana may have a firm basis in truth — legalizing cannabis produces a spike in junk food sales.
Cannabis cookies munchies
A recent study finds strong evidence for the 'munchies' phenomenon.
In the United States, marijuana laws have changed immeasurably over recent years.
These shifts are likely to have both positive and negative effects on the population at large. It is crucial for scientists to identify what these changes might be.
A recent study assesses one such influence. The authors set out to investigate the phenomenon of cannabis-induced "munchies."
Smoking marijuana, so the popular narrative goes, drives people to binge on high-fat, high-sugar junk food items afterward.
There are some neuroscience-based theories that help support this well-known trope, but, as it stands, there is little causal evidence.
The closest thing to supporting evidence is a study that found a link between enforcing medical marijuana laws and a reduction in average body weight.
Purchasing data
Recently, two economists decided to look for patterns in purchasing activity that might provide clues as to the existence of the so-called munchies.
Michele Baggio, an assistant professor of economics at the University of Connecticut in Mansfield, and Alberto Chong, a professor at Georgia State University in Atlanta, carried out this work.
They published their findings in the journal Social Science Research Network.
Explaining why they embarked on the project, the authors say, "it is rather important to understand not only the direct impact of cannabis use but also any unintended behavioral spillover effects."
Specifically, the researchers looked at the effect of recreational marijuana laws (RMLs) on food consumption. They looked at retail data from more than 2,000 U.S. counties across the 48 contiguous states from 2006–2016. The data came from grocery, convenience, drug, and mass distribution stores.
Recent studies reveal a complex pattern of harms and benefits that vary with age and other medical conditions.
RMLs came into effect at different times, giving the researchers an opportunity to assess the impact on food sales both in legalizing states and in neighboring counties in unaffected states.
Using direct sales data makes the study's findings robust. Previous research has relied on self-reported food intake, which underreporting can make incorrect.
The researchers focused on the purchase of ice cream, cookies, and chips in RML states and non-RML states before and after RMLs came into effect. 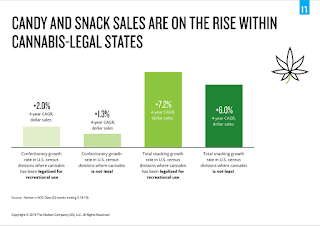 The munchie effect
As expected, there was a spike in the sales of high-calorie foods just after the introduction of RMLs.
Specifically, just after the legalization of recreational marijuana, the researchers saw a 3.1 percent increase in ice cream purchases, a 4.1 percent increase in cookie purchases, and a 5.3 percent increase in chip purchases.
Although ice cream and chip purchasing slowly declined over the following months, cookie purchases remained high. Overall, the authors conclude:
"[W]e find that legalizing recreational marijuana leads to an increase in sales of junk food."
"These might seem like small numbers," says Baggio, "but they're statistically significant and economically significant as well." The effect was the same across all three of the states in the study that had introduced RMLs.
The findings are interesting and will, no doubt, form the basis of future work. "I'm not an advocate for legalization or not," Baggio says. "I'm just interested in whether there are unintended consequences to the policy."
In a country that obesity is already having a substantial effect on, even small changes in dietary habits have the potential to make significant differences to general public health.
In the future, it will be useful to understand precisely why munchies occur and whether it is possible to control or minimize them. The debate surrounding cannabis laws and public health is likely to continue, and these results may now form part of the discussion.
This website is certified by Health On the Net Foundation.
Healthline Media UK Ltd, Brighton, UK.
© 2004-2019 All rights reserved. MNT is the registered trade mark of Healthline Media. Any medical information published on this website is not intended as a substitute for informed medical advice and you should not take any action before consulting with a healthcare professional.