What separates the amateurs from the pros in the world of cannabis? Surprisingly, it is often a basic knowledge of the plant itself.
For those seeking a foothold in the burgeoning cannabis industry, a fundamental understanding of the plant and its parts is essential to gaining the trust and respect of experienced cultivators, extraction artists, and dispensary owners—many of whom are wary of outsiders entering their cloistered culture.

So snap in that five-point harness and get ready for an education. Because if you’re trying to jump on the greenrush bandwagon and make a mint, it might behoove you to understand what you sell….

There are actually two types of leaves on a mature, or flowering-stage, cannabis plant: Fan leaves and sugar leaves. Fan leaves are the largest on the herb and each feature between five and 11 individual leaves (depending on the maturity of the plant; five to nine is most common). Fan leaves extend out from the stalk and branches of the plant. Sugar leaves, which are much smaller, protrude from the flowers of the plant and are present only in the final flowering stage of growth.
Sugar leaves, because they are part of the flower (see Calyxbelow), offer a dense blanket of resin-bearing trichomes, the medicine factories of the cannabis plant. The plant’s large fan leaves, on the contrary, serve the primary purpose of acting as solar panels to gather sunlight in their role in photosynthesis (why they are large and reach the furthest from the plant).

Despite the prevalence of seven-pointed leaf imagery in modern cannabis marketing, it is actually the flowers of the plant that produce its highly medicinal and sticky resin that delivers medical benefits and psychoactive effects to users. Flowers are comprised of three core elements: The calyx, the sugar leaves, and the pistils (see Pistils below). 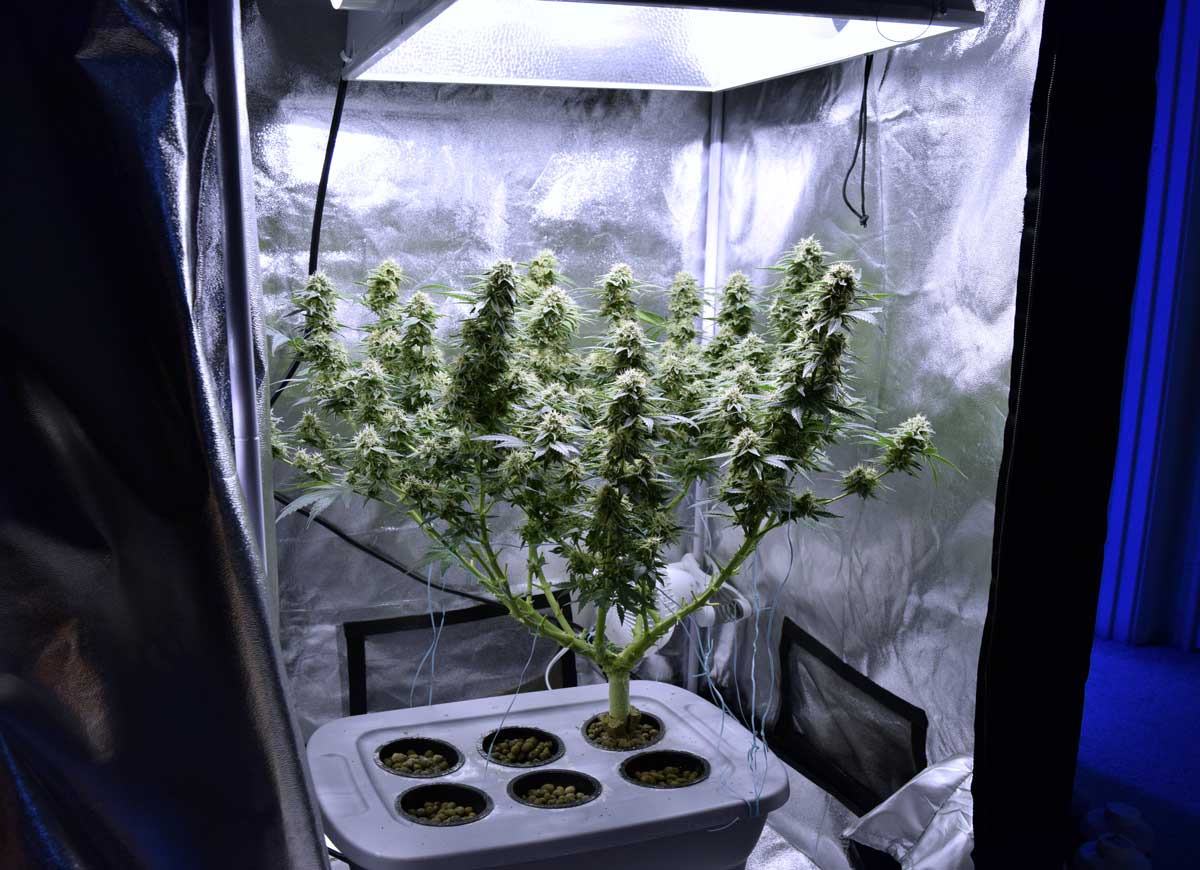 The cola is the main (and largest) flower that typically resides at the top of the plant. However, plants are not relegated to a single cola. Some gardeners, in an effort to maximize yield, “top” their plants, forcing them to create multiple colas.

There’s much talk in the cannabis culture about the flowers, buds, and nugs of the plant. Technically, these are all references to the calyx of this medicinal vegetable. Although sometimes obscured by the sugar leaves, especially in very resinous strains, these tear-shaped nodules appear in a variety of forms and sizes.
For cultivators, the calyx is significant because it begins to truly form about mid-way through the flowering stage of growth. A healthy calyx is the source of healthy medicine.

Pistils are the red and orange hairs that protrude from the flowers of the plant. During their early development, the pistils are thick and bright white, similar to young roots of pot plants. Healthy, robust cannabis plants often produce large flowers that contain plentiful pistils, making this part of the plant synonymous with potent, quality medicine.

Although dense patches of red hairs in finely trimmed buds certainly lend bag appeal to cannabis, these fine hairs produce none of the precious cannabinoids and terpenes of the plant. Their biological function, rather, is to capture pollen from male plants as it floats by in an effort to propagate the species.

All of the medicinal and psychoactive effects conveyed by cannabis are provided by two types of chemicals in the plant: Cannabinoids and terpenes. These molecules are produced in special secretory glands found primarily on the calyx and sugar leaves of the plant called trichomes.

Trichomes produce resin, a semi-translucent, sticky substance that protects the cannabinoids and terpenes within from environmental hazards (such as UV light) and predators (it has an odor and flavor that repels them). For humans, all of the health-improving, spirit-enhancing psychoactive goodness of the plant is contained in these small medicine factories.
Learning cannabis anatomy is the first step towards becoming both a knowledgeable consumer and master grower. Armed with your new knowledge, check out The Definitive Guide To Growing Weed Indoors by our friends over at GreenCamp.

About Gooey Rabinski  17 Articles
Gooey Rabinski is a technical writer, instructional designer, and photographer who has been covering the cannabis culture since 2004. His work has appeared in High Times, Cannabis Culture, WoahStork, SKUNK, The Emerald Magazine, MERRY JANE, Weed World, Grow Magazine, Whaxy, Green Flower Media, and Cannabis Health Journal. Rabinski crafts compelling educational media that focuses on the science of the cannabis herb, patient advocacy, and eliminating the social stigma that has existed for more than a century in the United States. His photography is available on Instagram at gooey_rabinski and he Tweets from @GooeyRabinski.
https://learn.woahstork.com/cannabis-science/cannabis-anatomy-101/
at June 05, 2019