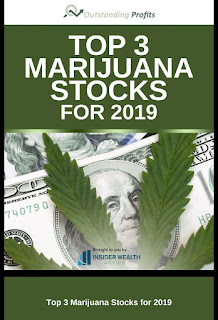 The Current State of Cannabis
The cannabis market has evolved at a rapid-fire pace.
Cannabis is a $10.8 billion industry in the U.S. alone, and that is
with it still being an illegal substance on the federal level.
Right now, 31 states across the U.S., as well as Guam and Puerto
Rico, have approved medical marijuana initiatives, and only nine
states, including California and Colorado, have approved cannabis
for recreational use.
Meaning there is still a long way to go to reach full legalization.But that hasn’t stopped this
industry from experiencing explosive growth. In fact, legal cannabis is currently the fastest-
growing industry in the United States.
And, if the trend toward legalization continues to spread to all 50 states, this “underdog” industry could quickly dwarf industry giants like alcohol, tobacco, organic goods, and even the entire NFL in just a handful of years.
By most calculations, the cannabis market will be a $100 billion industry in the next 48 months.
That is a 12-fold increase from marijuana’s current market value.
We’re talking about expansion and growth bigger than broadband internet in the 2000s, cable television, and semiconductors combined.
Remember, we’re just talking about the U.S. market. We haven’t even started to factor in the burgeoning Canadian market that just made a revolutionary legalization move of its own.
Truth is, we’ve never seen an opportunity like the one we have today with cannabis.
You have the chance to get into cannabis before the federal government ends the prohibition.
Before big institutions pour billions of dollars into it, which can turn every day Americans
into millionaires.
To be absolutely clear, this is the opportunity of a lifetime.
Here are our top selections for 2019.

I first started following Constellation Brands Inc. over 30 years ago, long before it ballooned
into the $40 billion giant we know today.
Back then, they were a much smaller and much different company.
In 1992, the company was called Canandaigua Wine Company, and it did a little less than $245 million in net sales per year.
At the time, Corona Beer’s growth story was just getting underway, and Canandaigua only had rights to it in about half of the United States.
Richard Sands was just taking over the business from his father, who founded the company.
His brother Robert was rising through the ranks and would eventually join Richard in the
executive suite.
Together, the Sands brothers envisioned a much larger company than the one their father
built from scratch in 1945.
Fast forward to today, and this 70-year-old New York-based company has worldwide
operations, roughly 40 facilities, and over 9,000 Employees.
It’s a Fortune 500 company with a reported $7.33 billion in revenue, and more than $18.6 billion in assets, and is the industry giant behind brands like Robert Mondavi, Corona Beer, Svedka Vodka, and Black Velvet Whisky.
And today, I’m going to show you why I think this blue-chip stock is the one cannabis play every investor needs in their portfolio.
Constellation’s Game-Changing Cannabis Move
making a $4 billion investment in Canopy Growth Corp. (NYSE: CGC), a premier cannabis
grower and distributor based in Ontario, Canada – claiming a 38% stake in the company in
the process.
While that influx of capital instantly became the largest single investment ever made in the
cannabis market and equipped Canopy to be the “King of Cannabis” in Canada and around
the world, it’s important to note that this wasn’t Constellation’s first stab at the cannabis market, or Canopy Growth, however.
In October 2017, Constellation decided it was time to get involved in the legal cannabis market and bought a 9.9% stake in Canopy for roughly $191 million.
At the time, it was the first move by a Fortune 500 company or a major alcoholic beverage maker to own a stake in a cannabis business. As part of the deal, Constellation can acquire as much as a 50% stake in Canopy over the next three years, should it exercise all available
warrants.
Constellation also has the opportunity to nominate four directors to Canopy’s
board, which is comprised of just seven members, thereby having a controlling interest.
Make no mistake, this is not a stock to trade.
It’s a stock to buy more and more of when your wealth increases, and when the inevitable share-price declines occur with an eye toward living off its dividends when you retire.
Constellation now has the assets and logistical wherewithal to become the biggest name in
the marijuana market, one that will continue to grow at high rates going forward regardless of whether or not the U.S. legalizes the product.
It’s a stable business, worth more than $7.5 billion in sales per year. It has a fixed infrastructure and multiple business relationships to leverage.
It’s true that Constellation shares fell a bit after the most recent earnings report. The major
contributor to an earnings season some termed disappointing was a big jump in spending for marketing and for increasing production capacity in Mexico.
Well, marketing and growing capacity for popular brands is a good reason to spend cash,
so it’s important to not fall in the mainstream gossip-chain surrounding this one.
There’s also one more thing…

Origin House is the best of a diminishing number of back-door ways to gain entrée to the
world of angel investing in cannabis companies through a public vehicle.
Origin House, which until Oct. 22, 2018 operated under the name CannaRoyalty, had more than a third of its assets invested in private cannabis companies through mid-2018.
These investments cover huge portions of the cannabis industry, from cultivation to branded cannabis products to testing to ancillary products.
Cannabis distribution is very good business in California, and it will only get better as the state improves its regulatory environment on the fly. That’s going to be a must for California for the state to be able to achieve its goal of stamping out the illicit market.
Origin House’s Leadership Is Nothing Short of Impressive
Origin House’s management is set up for success.
The CEO, Marc Lustig, is an experienced investment banker. It was his leadership that brought together such an outstanding portfolio of profitable investments.
And it will be his leadership that maximizes the company’s proceeds as it disposes of the assets.
As for the distributor business, it’d be difficult to do much better than Ted Simpkins. Not only was he the CEO of RVR back when Origin House only owned a piece of it, he has years of experience with California’s largest wine and spirit distributor, Southern Wine and Spirits.
A distributor of a highly regulated product with thousands of small participants in California is a perfect place to prepare to be a cannabis distributor there.
It’s also worth noting that former Molson Inc. CEO Dan O’Neil recently joined the company’s
board. That’s yet another senior executive from the beer industry who wants to invest in cannabis.
Because of Origin House’s massive transformation, the company’s historical results are irrelevant.
The firm hasn’t shown much in revenue because it had minority positions in most of its investments. But the most recent quarter gives a glimpse of the company’s future.
Run-rate revenues were $14 million, and gross margins came in just under 23%, a healthy
profit for a distribution company that reflects branded product sales.
By comparison, SYSCO
Corp., the massive food distribution company, had average gross margins of 18.3% over the
past four years.
Run rate revenues and gross margin will increase because of a branded products and cultivation company acquisition that closed on July 2, 2018.
Over the next year or so, the company will have to either grow into its large administrative
footprint or shrink that footprint in order to become consistently profitable. With the proceeds of the investments the company intends to wind down, we have high confidence that Origin House can make the transition.

Charlotte’s Web Holdings is the largest CBD (cannabidiol) company in the world. Charlotte’s
Web produces its CBD products from hemp it grows itself in Colorado or that it purchases
from contractors in Kentucky and Oregon.
Charlotte’s Web began operations in 2016. It came about when a family in Colorado, the Stanley Brothers, began growing cannabis and developed a strain with a very high ratio of CBD to THC.
The idea was to help cannabis patients who for whatever reason chose not to experience the high which THC brings on.
This strain of cannabis turned out to have a dramatic effect on children with a seizure disorder called Dravets syndrome. Children who took the medicine saw the frequency and severity of their seizures plummet.
One of those patients, a little girl named Charlotte Figi, is the inspiration for the name of the
company. It was after hearing Charlotte’s story that Dr. Sanjay Gupta changed his mind
about cannabis.
If Dravet’s syndrome sounds familiar, it should. Dravet’s is one of the two rare forms of epilepsy for which GW Pharmaceuticals received FDA approval for Epidiolex. It broke the glass ceiling, becoming the first U.S. Food & Drug Administration-approved drug comprised from CBD.
Here’s the interesting thing about that: Epidiolex’s only active ingredient is CBD.
Functionally, the pharmaceutical – which retails at about $32,500 per year – is no different
from the products Charlotte’s Web sells on its website.
Charlotte’s Web-branded products just costs less than half as much for the same dosage.
It’s stories like that which inform Brightfield Group’s optimistic assessment of the industry.
CBD and other non-psychoactive cannabinoids have the potential to treat dozens of conditions from minor inflammation to the most serious seizure disorders.
CBD and its chemical cousins have the potential to completely disrupt massive chunks of the medical industry from over-the-counter medications like aspirin to exotic treatments costing tens of thousands of dollars per year.
Its products are already regarded as the gold standard in the CBD industry for purity and quality.
That reputation led Charlotte’s Web to place products in over 2,700 retail stores by Fall 2018. And that’s before getting into massive chains like Target, whom NICI learned has been in talks with Charlotte’s Web or Whole Foods or any number of national grocery stores.
The company increased revenues by 172% over 2016’s number, and revenues should double again in 2018. But the big opportunity for Charlotte’s Web is yet to come.
CBD is primarily sold over the internet or stores that seem to cater to illicit cannabis smokers.
As CBD quickly evolves into a more mainstream product, it will become available in more traditional health products stores.
----------------------------------------
Outstanding Profits © Insider Wealth Alert, 1525 East 3rd Street, Brooklyn, NY 11230. All rights reserved.
No statement or expression of opinion, or any other matter herein, directly or indirectly, is an offer or the
solicitation of an offer to buy or sell the securities or financial instruments mentioned. While we believe the
sources of information to be reliable, we in no way represent or guarantee the accuracy of the statements made
herein. Outstanding Profits and Insider Wealth Alert, do not provide individual investment counseling, act as
an investment advisor, or individually advocate the purchase or sale of any security or investment. Neither the
publisher nor the editors are registered investment advisors. Subscribers should not view this publication as
offering personalized legal or investment counseling. Investments recommended in this publication should be made only after consulting with your investment advisor and only after reviewing the prospectus or financial
statements of the company in question. Unauthorized reproduction of this newsletter or its contents by
Xerography, facsimile, or any other means is illegal and punishable by law.
at May 28, 2019