A key promise of legalization is that it will free up police resources to fight real crime.
That appears to have happened in the first two legalization states, Washington and Colorado.
In a 2018 study in Police Quarterly, ‘Marijuana Legalization and Crime Clearance Rates’, an independent Washington State University research team crunched the FBI’s crime statistics and saw “no negative effects of legalization on crime clearance rates. … Moreover, evidence suggests some crime clearance rates have improved.”
“This means we’re improving the efficacy of law enforcement, …”
Law Enforcement Action Partnership
The study could answer the concerns of many local officials across the nation. In legal adult-use states, local leaders are banning retail dispensaries in about half of all jurisdictions, according to Leafly’s new special report Debunking Dispensary Myths. One of the main fears driving those bans: Crime.
Research shows that legalizing cannabis and allowing state-licensed stores in a local community does not increase local crime rates, though. In fact, those actions may be having the opposite effect.
Auto burglary clearance rates, for example, rose an extra 5% in Washington post-legalization, researchers found. That’s 3% above and beyond the national average. “We are quite certain that legalization has not unduly hampered police performance, at least as measured by clearance rates,” the study reported
Ready to Shop Legal?
LEAFLY LOCATES YOUR LOCAL CANNABIS MENUS
TRY LEAFLY FINDER
Funded by a US Department of Justice grant, the WSU team looked at 12 years of crime clearance rates from Colorado and Washington and compared them to the US average, as well as to other states singularly.
The study reported: “Our results suggest that, just as marijuana legalization proponents argued, the legalization of marijuana influenced police outcomes” in a positive way. Incident clearance rates “grew more in Colorado than in the rest of the country for all crime types except aggravated assault and motor vehicle theft, and similarly rose more in Washington than in the rest of the country for violent crimes and burglary.”
Legalization is correlated to better clearance rates, but it may not be causing them.
“While our results cannot specifically explain why police clearance rates have increased in Colorado and Washington,” the team reported, “we think the argument that legalization did in fact produce a measurable impact on clearance rates is plausible.”
The report came as no surprise to leaders at Law Enforcement Action Partnership (LEAP), a group of former law enforcement officials who advocate for criminal justice reform. They said the findings confirm what they’ve observed for years: police resources were wasted on marijuana possession crimes.
“We knew we were spending an inordinate amount of time busting people for a crime that almost never harms anyone—other than the user—while serious crimes went unsolved. The disparate use of resources was obvious and incredibly frustrating to people like ourselves who became police officers because we wanted to help people and make our neighborhoods safer.”
“This means we’re improving the efficacy of law enforcement, which makes police happy because we know we’re having a positive impact—and makes civilians happy because they’re not having as many unnecessary, unpleasant, and frankly damaging interactions with us,” LEAP said in an email to Leafly.

What Are Clearance Rates?

A clearance rate is a measure of police performance, and more abstractly, law and order. It’s the ratio of the number of arrests made relative to the crimes reported. When clearance rates are low, criminals know they can operate with impunity. When clearance rates are high, it means more reports of crime are resulting in police handcuffing someone, case closed. It’s not a perfect metric, but it’s one of the best indicators we’ve got.
Clearance rates in both Colorado and Washington have historically trailed the national average. Voters explicitly passed Colorado Amendment 64 and Washington Initiative 502 to free up police resources to tackle that issue. “In fact,” the research team noted, “legalization proponents made this argument in every one of the 12 states where citizens voted directly on marijuana legalization ballot measures predicting that legalization would improve clearance rates.”

The Burden of Marijuana Policing

Policing marijuana crime is a substantial burden on society.
According to the FBI’s annual Uniform Crime Reports, drug arrests are the number one type of arrest police make, by volume. And marijuana possession arrests are the number one type of drug arrest, by volume. Harvard economist Jeffrey Miron estimates the police waste $13.7 billion per year to discourage marijuana use through arrests and other operations. Despite 80 years of this criminalized approach, polls show about half of Americans have tried cannabis.
On average, every police officer in America spends five hours per week on marijuana enforcement, according to one 2004 estimate.

Marijuana possession arrest rates collapsed in Washington and Colorado after the passage of statewide legalization initiatives in 2012.
“This overall decline in arrests for marijuana possession represents a considerable change in police activity,” researchers note. “If we can assume that the police had not somehow become less proficient in making marijuana possession arrests when attempting to do so, then by extension we would expect that they have redirected their efforts toward resolving other violations of the law.” 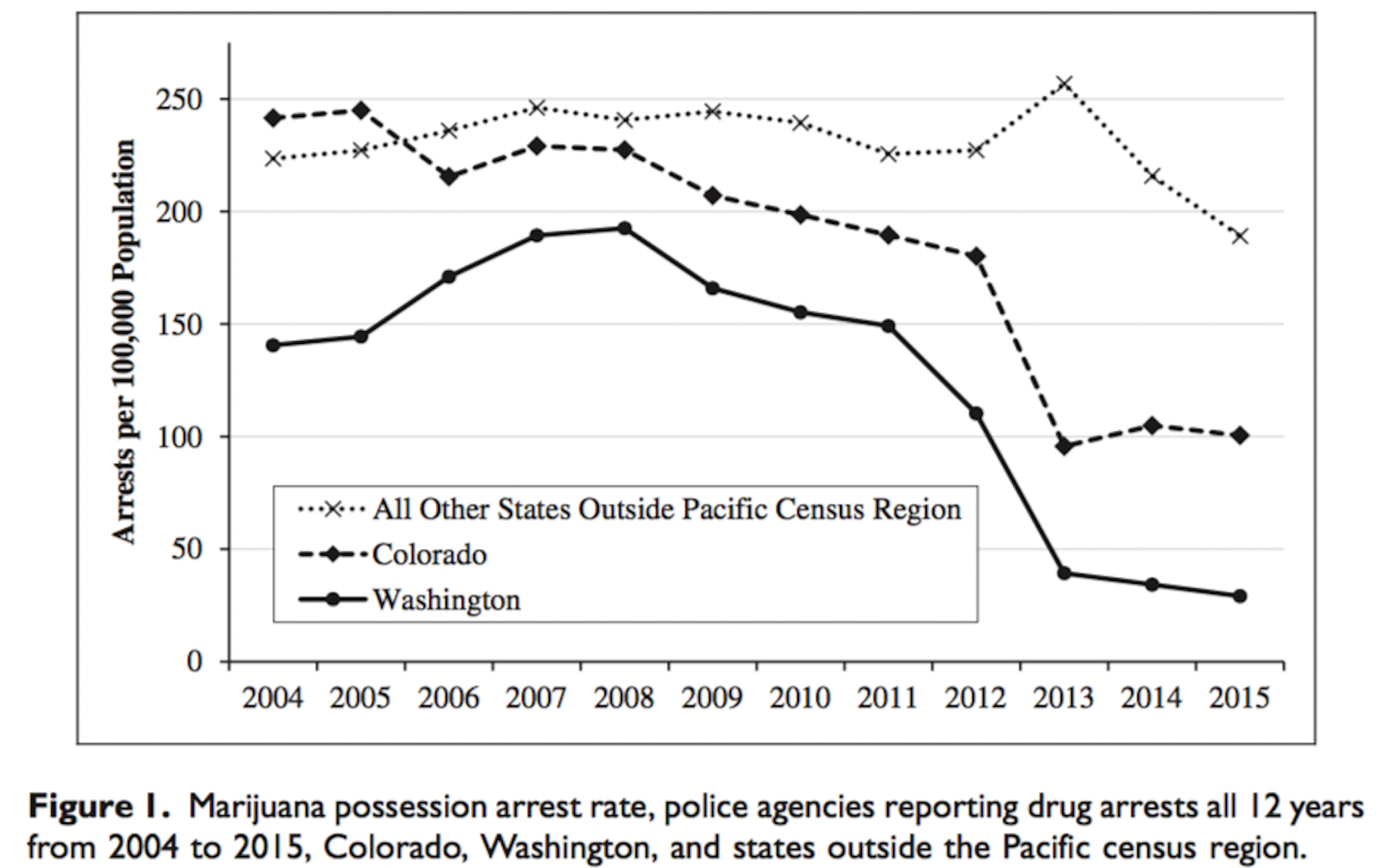 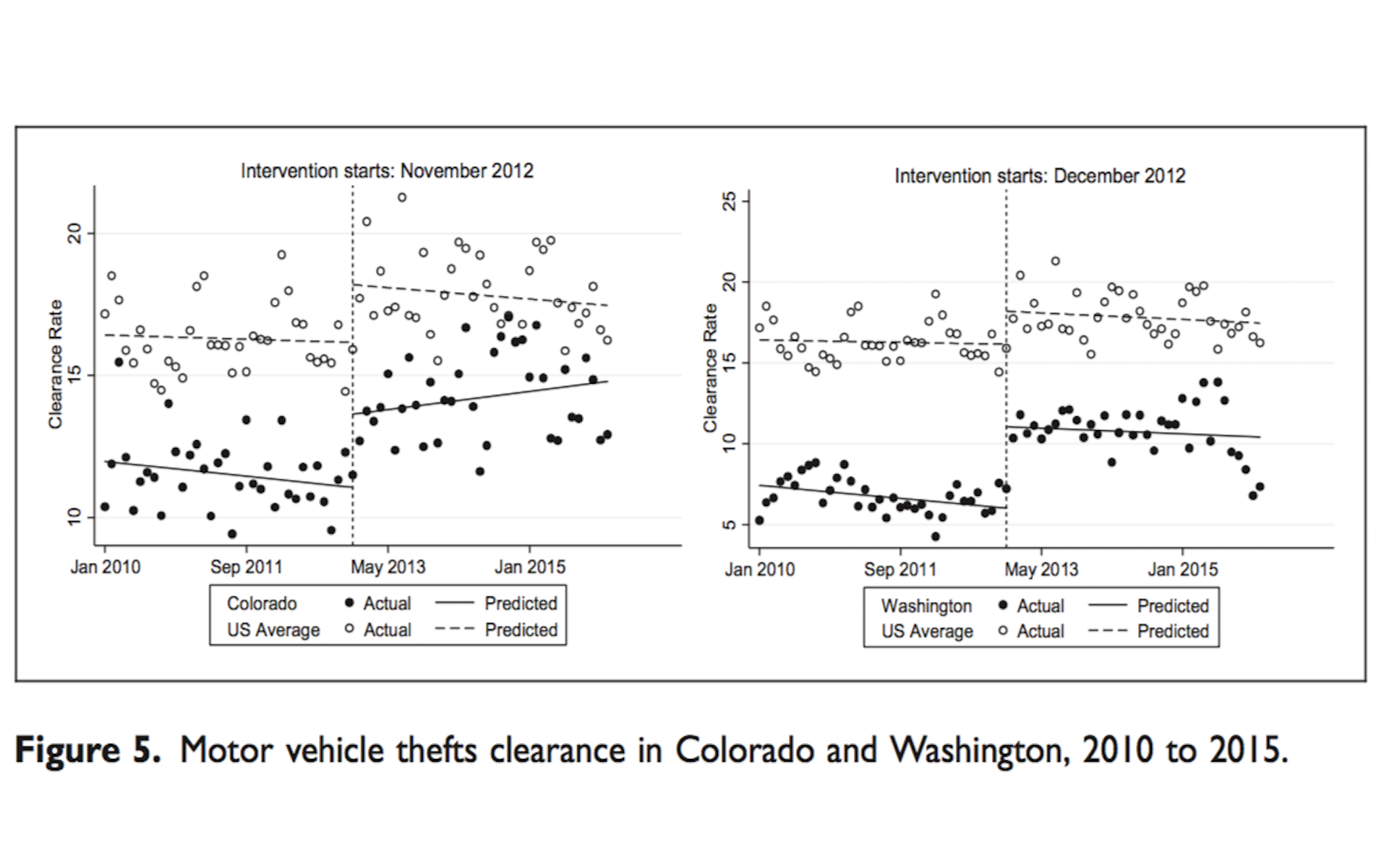 “Washington’s auto burglary clearance rate increased by nearly 3% more than the control states at the point of intervention,” the study noted. “This is a noteworthy response, given that clearance rates for motor vehicle thefts increased by about 2% for states on average, thus suggesting that the rate in Washington increased by approximately 5% immediately following legalization.”

The study can’t say for sure that legalization caused better clearance rates—those improvements are only associated with the onset of legalization. Some third factor could be driving the clearance rate improvements. But researchers do know that police changed their focus after 2012.
Cannabis legalization “undoubtedly resulted in the opportunity for agencies to reallocate resources” the study team wrote, and that’s an “important organizational factor that may influence clearance rates.”
The researchers also suggest, ironically, that society’s focus on crime statistics may be amplifying the war on marijuana. Budgets and police overtime tied to arrest numbers is a dynamic referred to as ‘collars for dollars.’ Now that the marijuana war is winding down, “officers are adjusting to meet existing performance goals in an environment where they are no longer able to ‘produce numbers’ using marijuana offenses.”
RELATED STORY
Leafly Study Debunks Dispensary Myths Around Crime & Teen Use
With cannabis gone, the team thinks police might be reprioritizing for crimes that had lower clearance rates, like auto burglaries.
“Are police officers working more overtime hours? Are we seeing new strategies being implemented or used? Or perhaps, are we witnessing the return of older, more aggressive crime clearance strategies? We cannot answer these questions with our current data.”
at May 23, 2019