Part 1 of 4: Leafly Study Debunks Myths Around Crime & Teen Use

When a state legalizes cannabis, local municipal officials are put in a tough spot. They have the power to allow or prohibit cannabis stores from opening in their jurisdiction. It’s done through property zoning.
When the issue comes up for vote, the discussion is often dominated by imagined fears. Law enforcement leaders warn about crime increases. Parents worry about their kids having easier access to cannabis. Real estate agents forecast doom for any neighborhood surrounding a cannabis store. Pew Research has found a 25 point gap between support for legalization (75%), and support for a store nearby (50%).
A review of the research finds that cannabis dispensaries improve public safety, health, and nearby property values—contrary to previous fears.
All too often, the result is a complete ban on cannabis stores—which has the unintentional effect of propping up the local illicit market. Here’s the rub: Cannabis stores actually improvepublic safety, health, and property values. The research proves it.
In a review of 42 key studies, Leafly’s team of data analysts, researchers, and editors found that the broad body of published research suggests crime near licensed dispensaries has generally stayed flat or decreased. Teen cannabis use in legalization states has fallen since legalization. And property values near cannabis outlets generally are not affected or even rise.

That literature review, Debunking Dispensary Myths , is intended to better inform civic debate at the city, state, and national levels. Leafly is sharing the report with elected officials, legislative aides, activists, industry groups, and researchers nationwide, as well as presenting the findings at upcoming events.
Fears surrounding local cannabis stores have prompted many communities to prohibit cannabis companies in their towns, cities, and counties. Millions of adult consumers now living in legal states find it impossible to purchase legally in their own towns. Leafly found that as of May 1, 2019: 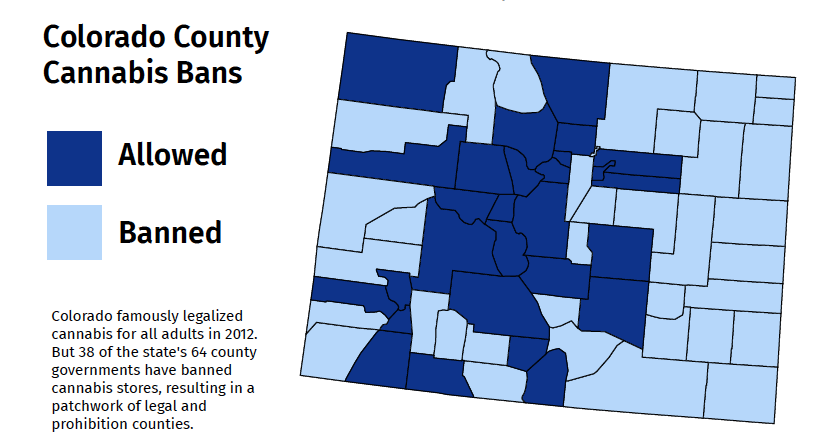 In Colorado and Washington, where data is now available from five years of adult-use cannabis sales, many local officials have switched from hesitance to confidence in the positive benefits of well-regulated stores. Cannabis companies “are tremendous employers and socially responsible members of the communities in which they operate,” said Ron Kammerzell, former senior director of enforcement at the Colorado Dept. of Revenue.

Dispensaries Add 6% to 8% to Home Values

Some of the data backing up that conclusion:
Debunking Dispensary Myths identifies and examines the most reliable studies on medical and adult-use cannabis stores. In the report, Leafly editors David Downs and Bruce Barcott worked with cannabis policy expert Dominic Corva, co-director of the Humboldt Institute for Interdisciplinary Marijuana Research (HIIMR) at Humboldt State University in Arcata, CA.
Over the coming years, virtually every city council and county supervisorial board will eventually have to weigh the pros and cons of cannabis retail.“We can all have different opinions, but we have to work from the same set of facts,” said Leafly CEO Tim Leslie. “These discussions should be informed by the best available research, not imagined fears and archaic mythology.”
David Downs and Bruce Barcott
adult-use cannabis California Colorado crime dispensaries Oregon research

David Downs and Bruce Barcott
David Downs is Leafly's California editor and host of The Hash podcast. Bruce Barcott is Leafly's deputy editor and host of The Roll-Up podcast.
4 Part Series
Part one
Leafly Study Debunks Dispensary Myths Around Crime & Teen Use
Part two
Coming Soon
Part three
Coming Soon
Part four
Coming Soon
Close
Sign Up for More Leafly News
By submitting this form, you will be subscribed to news and promotional emails from Leafly and you agree to Leafly's Terms of Service and Privacy Policy . You can unsubscribe from Leafly email messages anytime.
at May 21, 2019