REDUX: OCTOBER 25, 2017 Record-High Support for Legalizing Marijuana Use in U.S.

WASHINGTON, D.C. -- Americans continue to warm to legalizing marijuana, with 64% now saying its use should be made legal. This is the highest level of public support Gallup has found for the proposal in nearly a half-century of measurement. 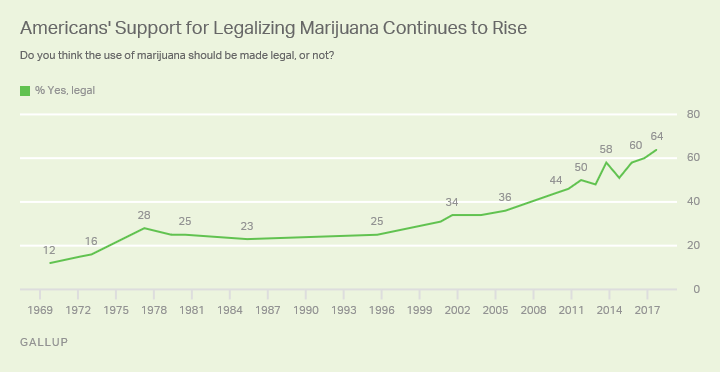 The latest figure, based on an Oct. 5-11 Gallup poll, follows shifts in the U.S. legal landscape regarding marijuana since Gallup's 2016 measure. While still illegal at the federal level, the issue was featured on a number of state ballot initiatives in 2016, and with eight states and the District of Columbia having fully legalized marijuana, more than one in five Americans live in a state where they can legally enjoy use of the drug.
Gallup first asked national adults about their views on the topic in 1969, when 12% supported legalization. Support had more than doubled by the end of the next decade but changed little throughout the 1980s and 1990s. By 2001, however, about a third of Americans favored legalizing marijuana, and support has steadily increased since. A majority of Americans have consistently supported legalizing marijuana since 2013.
The trajectory of Americans' views on marijuana is similar to that of their views on same-sex marriage over the past couple of decades. On both issues, about a quarter supported legalization in the late 1990s, and today 64% favor each. Over the past several years, Gallup has found that Americans have become more liberal on a variety of social issues.

Gallup AnalyticsSubscribe to our online platform and access nearly a century of primary data.
Learn more
Majority of Republicans Now Support Legalizing Marijuana
Democrats and independents have historically been much more likely than Republicans to say marijuana should be legalized. In 2009, Democrats were the first partisan group to see majority support for legalization, followed by independents in 2010.
This year for the first time, a majority of Republicans express support for legalizing marijuana; the current 51% is up nine percentage points from last year. 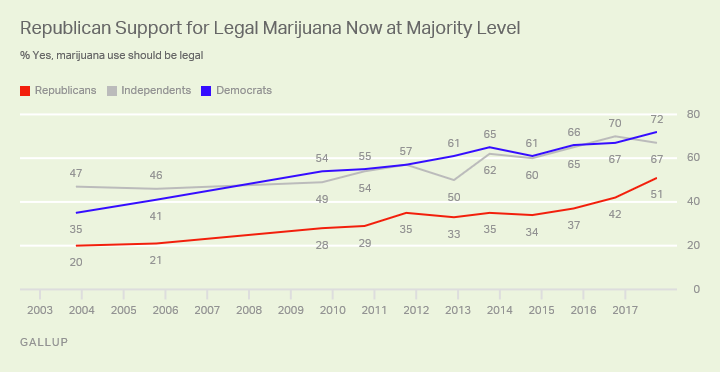 Bottom Line
As efforts to legalize marijuana at the state level continue to yield successes, public opinion, too, has shifted toward greater support. The Department of Justice under the current Republican administration has been perceived as hostile to state-level legalization. But Attorney General Jeff Sessions could find himself out of step with his own party if the current trends continue. Rank-and-file Republicans' views on the issue have evolved just as Democrats' and independents' have, though Republicans remain least likely to support legalizing pot.

Results for this Gallup poll are based on telephone interviews conducted Oct. 5-11, 2017, with a random sample of 1,028 adults, aged 18 and older, living in all 50 U.S. states and the District of Columbia. For results based on the total sample of national adults, the margin of sampling error is ±4 percentage points at the 95% confidence level. All reported margins of sampling error include computed design effects for weighting.
Each sample of national adults includes a minimum quota of 70% cellphone respondents and 30% landline respondents, with additional minimum quotas by time zone within region. Landline and cellular telephone numbers are selected using random-digit-dial methods.
View survey methodology, complete question responses and trends.
Learn more about how the Gallup Poll Social Seriesworks.
October 25, 2017Gallup https://news.gallup.com/poll/221018/record-high-support-legalizing-marijuana.aspxGallup World Headquarters, 901 F Street, Washington, D.C., 20001, U.S.A+1 202.715.3030
at March 21, 2019