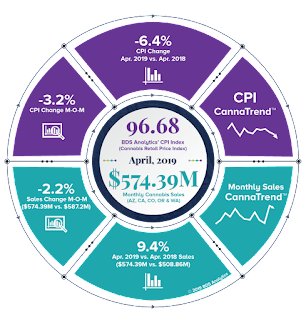 BDS Analytics’ Cannabis Price Index (CPI) is a benchmark of retail sales pricing of cannabis products across legalized markets in the United States. The index currently covers sales in Arizona, California, Colorado, and Oregon, states that constitute more than 55 percent of the legalized sales in the United States in 2018. Underlying pricing data is based on actual dispensary transactions captured by BDS Analytics’ GreenEdge™ Retail Sales Tracking Platform. The Index baseline is January 2018, coinciding with the launch of adult-use sales in California, the nation’s oldest and largest cannabis market. Note: to help standardize our retail price data, for Flower and Concentrates we convert all transactions into price per gram; for Ingestibles, Topicals and Vapes we convert sales into a price per unit measure.
BDS Analytics’ CPI is unique in its ability to index pricing across all product categories, a significant insight as Flower is rapidly becoming a commodity product and growth in the nation’s booming cannabis market is largely being driven by branded products in other categories.
As temperatures heat up in the spring so do cannabis sales and competition. BDS Analytics’ CPI for April 2019 stands at 96.68, a decline from the trailing month and the lowest score to date. Compared to the prior April, average retail prices have declined six percent. Compared to the trailing month, average retail selling prices declined three percent.
The index score is positive for Ingestibles and Topicals, two categories that have seen inflation thanks to a higher proportion of sales attributed to CBD specific products that cost considerably more than THC-only varieties. All other product categories including Flower, Vape, Pre-rolled Joints, and dabbable Concentrates all have negative CPI scores which is indicative of falling prices as compared to January 2018. In the most recent comparison vs. the trailing month, all categories saw a decline in relative pricing save for dabbable Concentrates where average prices increased slightly as compared to March.
GreenEdge™ Insights: In April 2019, legal cannabis sales at dispensaries across Arizona, California, Colorado, Oregon, and Washington reached a combined $574.4 million, a two percent decrease from the trailing month and a 13 percent increase from the prior April.
Despite 4/20 being the largest single-day of sales for the year, April sales historically dip from March and this past year the trend was no different. This year, “420” fell on a Friday and compared to the typical Friday, sales were 120 percent higher. Despite the boost from “420”, the volume of sales in April remain even from the trailing month and increased discounting resulted in lower revenues. Sales from all product categories declined by an average of three percent across Arizona, California, Colorado, and Oregon combined.
April showers bring May FLOWER. As the days grow longer sales historically pick up. Stay tuned for the next installment of the CPI for a recap of cannabis sales trends in May.
The information contained in this report and all its copyrights are owned by BDS Analytics, Inc.
© 2019 BDS Analytics