** BREAKING NEWS: Florida's Cannabis Director Says Hemp Permits Could Be Issued Before The Year Is Out 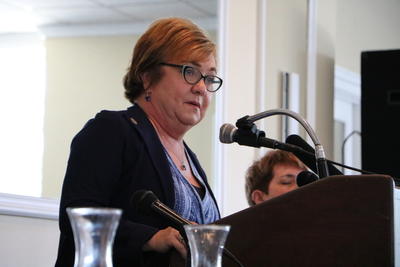 Holly Bell, Florida's Director of Cannabis under the Department of Agriculture and Consumer Services, gave a talk to the Network of Entrepreneurs & Business Advocates in Tallahassee Tuesday, May 28, 2019.
CREDIT RYAN DAILEY / WFSU-FM
Florida’s Director of Cannabis has only been on the newly-created job a few months, but is already helping architect the foundation for a state hemp program.
Listen
Listening...
3:23
The state hemp program, given the green light by Florida legislators this session, is still waiting on a signature from Governor Ron DeSantis. But plans are already in motion to have grower permits issued, potentially before the year is out.
Holly Bell is the state’s first Director of Cannabis under the Department of Agriculture and Consumer Services.
“Once we get our rules done, we’ll post them to the system called FAR (Florida Administrative Register), then the public can review them and make comments. The internal group will review them, make sure we’ve done our job. If we have no objections, then we can adopt our rules and start a program,” Bell said. “We’re looking at late fall, at the earliest, where we would be able to implement permits.”
Bell gave a talk to the Network of Entrepreneurs & Business Advocates in Tallahassee Tuesday. Her message? Florida has an opportunity to seize on huge demand for hemp products, particularly CBD.
“There is an immediate demand for that today,” Bell told the group. “There is a shortage of that product today. There are outstanding orders for large amounts of isolate by large manufacturers of everyday products that you’d recognize.”
That includes hemp-infused skincare and hair products and CBD edibles, just to name a few. Bell says even after permits are distributed, there will be somewhat of a wait before the first batch of crops is out of the ground.
“2020 is going to be our first, I believe, great grow year for industrial hemp,” Bell said.
So what kind of money can hemp inject into a state economy? Bell has been watching other states to get an idea.
“There are 13 states that have very active commercial hemp programs,” Bell said. “And the commercial hemp programs are producing almost a billion dollars as of 2018.”
What does that earning potential look like on an individual level, for farmers who want to get a high yield on their acreage? Bell drew from her experience in Tennessee for an anecdotal answer.
“I will tell you what I saw in Tennessee, when I worked with farmers there and talked to them: They were netting at least $20,000 an acre profit on the CBD-type hemp. And that was a farmer that wasn’t putting a lot of effort into it,” Bell said.
Bell says Florida will buck the trend of a vertical integration model it used for medicinal marijuana – with higher barriers to entry and fewer players able to enter the industry. Rather, she says, the Department of Agriculture wants to make the burgeoning hemp industry more accessible. And, Bell says, that could be a very good thing for some of Florida’s rural counties.
“Private equity money, venture capital money, this investment money – some of these more rural areas are actually the most attractive to go to,” Bell said. “Because you have the land to grow it, you have some facilities sitting empty, and you have the employment and workforce to staff your factory.”
Those principles seem to lend themselves to greater interest among perspective growers to set up shop in North Florida rather than the southern part of the state.
“I do believe it’s probably because you’re going to have a better grow soil up here initially, for the CBD-type hemp, because you’ve grown tobacco up here,” Bell said.
Bell added she’s seen about “two-to-one” greater interest in starting grow operations and processing plants in North Florida.
___________