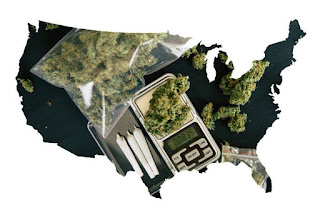 Hint: It's not New Jersey or New York, but it does have multibillion-dollar potential.

Sean Williams
(TMFUltraLong)
In terms of momentum, the marijuana industry has been practically unstoppable in recent years. Once considered a taboo topic that lawmakers regularly swept under the rug, cannabis has now become a mainstream topic in the United States, as evidenced by the fact that 2 out of 3 Americanssupport broad-based legalization, according to Gallup.

Cannabis favorability has also been the driving force of legalizations at the state level. In 24 years, we've gone from having zero approved medical or recreational weed states to 33 states with medical pot laws on their books. Of these 33 states, 10 allow for adults to consume cannabis, with nine having OK'd the retail sale of pot (sorry, Vermonters).
•
With pot revenue picking up at the state level, and polling clearly favoring legalization, it looks to be only a matter of time before new states take the plunge from the medical or recreational side of the equation. But, to be clear, recreational sales are expected to bring in the lion's share of legal marijuana revenue in the United States.
•
For starters, MedMen Enterprises(NASDAQOTH:MMNFF) would be doing the happy dance. Although the upscale, vertically integrated dispensary operator has but one open location in Oak Park, it would make MedMen's $682 million all-stock deal to buy privately held PharmaCann look all the sweeter.
You see, PharmaCann was initially awarded six medical marijuana licenses in Illinois, which was tops in the state at the time of the award. It has four open dispensaries that serve about 80% of the Chicagoland market, and it has two relatively local production facilities. With the infrastructure already in place, MedMen would simply need to apply for a recreational license, or amend its existing medical pot licenses, to get a piece of what could be a multibillion-dollar market.
IMAGE SOURCE: GETTY IMAGES.
Recreational weed legalization in the Land of Lincoln would also be a feather in the cap for Canopy Growth (NYSE:CGC), which announced the contingent acquisition of Acreage Holdings(NASDAQOTH:ACRGF) for $3.4 billion last month. If the U.S. federal government legalizes marijuana, within a 90-month time frame Canopy will have the right to acquire Acreage, which currently has cultivation, processing, or retail operations in 20 states -- best among vertically integrated dispensary operators.
Among those 20 states is Illinois, where Acreage has a cultivation farm and two dispensaries. In other words, it would further entrench Canopy Growth in one of America's key markets.
The largest vertically integrated dispensary by license count (assuming all pending acquisitions close), Harvest Health & Recreation(NASDAQOTH:HRVSF), also stands to benefit. In March,
Harvest Health announced that it'd be acquiring privately held Verano Holdings for $850 million in an all-stock deal. Verano currently has two Zen Leaf dispensaries located in Illinois (one in Chicago and the other in St. Charles). While Harvest Health will have 130 retail store licenses in 17 states (again, assuming all acquisitions close), you can count on Illinois becoming a reasonably important part of its long-term strategy.
Now, we simply watch and wait to see if Illinois lawmakers can deliver the green as the governor has promised.
at May 12, 2019